The FarSync X.25 TE1 product is a high quality X.25 solution for business, government and military applications, it has been developed to provide high performance, versatile X.25 connectivity for Linux and Windows systems.

The TE1 card installs seamlessly as a plug and play device under the popular Linux 32 and 64 bit distributions. The card supports Linux kernel versions from 2.6.12 onwards in 32 and 64 bit formats, including the leading distributions supplied by Red Hat, SuSE, CentOS, Ubuntu, Debian, Fedora, Slackware and more. SMP (multi-processor) systems are supported. Configuration is by a Java based GUI.

There are APIs to the X.25 layer, a Sockets based interface and a Java API. There is also an API to the ISO Transport layers (ISO 8073 – connection oriented).

IP over X.25 support is included permitting TCP/IP operation over an X.25 network.

Up to 254 connections are supported as standard or up to 4095 connections using the FarSync X25 High Capacity Pack.

FarSite is committed to supporting the FarSync X25 TE1 on new versions of Linux and Linux kernels as they are released. The source code for the driver and the libraries for the API are supplied with the product, allowing rebuilding by the end user for use with almost any of the current or future Linux variants.

The X.25 software has a host of features including ISO Transport (classes 0 to 3), support for OpenFT FTAM, a WinSock2 compliant Sockets API, a Java API and a COM Port API. The Sockets API is also accessible from .NET applications. Up to 4095 connections can be supported using the FarSync X25 High Capacity Pack or 254 as standard.

IP over X.25 support is included permitting TCP/IP operation over an X.25 network.

X.25 Developers Toolkit: A comprehensive Developers Toolkit for development using APIs to X.25 and ISO Transport is included with each product covering Linux and Windows. In addition, the Windows product has a toolkit for the LAPB API. A multi-port Line Monitor and a Line Statistics application are also supplied.

The FarSync X25 TE1 card is suitable for connection to all types of X.25 networks and leased lines. Typical applications include:

The FarSync X25 TE1 runs an AMD processor with SRAM and an embedded HDLC controller connected to the Server/PC through an Universal PCI bus with the E1 connection provided by a FALC56.

The drivers supplied with Windows and Linux allow large numbers of ports to be supported by the installation of multiple FarSync X25 TE1 cards in a Server. Typically 12 or more cards can be supported; the card limit is only dependent on the PCI / PCI-X slot count and resources available in the host Server and the total bandwidth of the PCI bus. The FarSync X25 TE1 can be mixed with other cards in the FarSync X25 range.

The FarSync X25 TE1 card is suitable for systems with a PCI or PCI-X bus, covering single processor systems, multi-processor systems and processors featuring HyperThreading technology. The card is PCI revision 2.2 compliant with support for both 3.3 and 5 volt signalling, the power for the card is taken from the 3.3 volt supply rail.

The FarSync X25 TE1 card may be fitted in either 32-bit PCI bus slots or 64-bit PCI-X bus slots as this Universal PCI card will work perfectly well in both.

The IP over X.25 support is included as part of the FarSync X25 TE1 product and is integrated into Linux and Windows.

Application developers have a choice of APIs for X.25, ISO Transport and accessing HDLC (LAPB). An API selector guide is provided to assist the developer in choosing the most appropriate interface. The comprehensive Developers Toolkit is included with the product.

The XOT extension allows applications using the same API to transmit data over XOT (X.25 over TCP/IP). TCP/IP is normally routed over Ethernet on PCs and Servers. The XOT support is compatible with FarSite’s FarLinX X25 Gateway and also other manufacturers XOT products. The XOT and X.25 interfaces can be used simultaneously.

The FarSync XOT Extension for Linux is available under product code FS9508, it should be ordered at the same time that the FarSync X25 card is purchased, although a retrofit is possible.

Note: There is also FarSync XOT Runtime software available that allows XOT to run over the PCs standard TCP/IP connection such as an Ethernet card.

An optional high capacity pack is available for the FarSync X25 TE1. The FarSync X.25 High Capacity Pack allows up to 4,095 simultaneous connections to be made, a huge increase from the standard 254 sessions. The expanded capacity applies to SVC, PVC and ISO Transport connections.

Windows Port Manager showing configuration of a TE1 for X.25 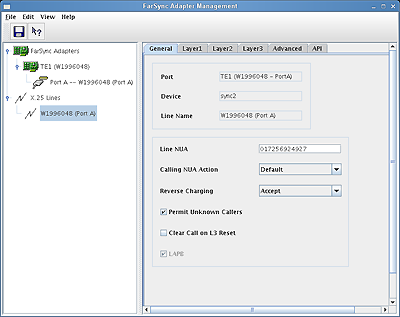 The X.25 software firmware, drivers, utilities and the X.25 Developers Toolkit are all included on the CD supplied with the FarSync card. RJ48 cable included.

The CD-ROM supplied with the FarSync X25 TE1 includes: