The FarSync T4Ee card and software is designed to provide high performance hardware communications solutions for business, government and military requirements who require a PCI express high capability synchronous communications card to support a range of different line signalling interfaces and highly adaptable control of line clocks. The product includes a low level driver that allows access to the communications features available in the hardware. The comms processing is handled by a FarSite Communications Controller that can be customisable for special use.

The card can use the host’s standard TCP/IP protocol stack to allow access to IP based networks such as the Internet. The FarSync SDK provides a Developers Toolkit for the product.

One of the unique features of the T4Ee is the variety of clock source options, clocks can be:

The FarSync T4Ee suits a very wide number of different applications these include:

The FarSync T4Ee supports a Windows based API, common to the entire range of FarSync cards/devices, it is referred to as the FarSync Windows API (FsWinAPI). This is an extension of the MS COMM API and enables, for example, applications developed to support COM ports, to be easily ported to use FarSync support in synchronous or asynchronous modes. This standardization enables the API to also be readily accessible from higher level environments such as .NET, C#, VB etc. The special clocking features are all accessible though the FsWinAPI.

Async operation support is also provided by the Win32 COMM interface as well as FsWinAPI.

The FsWinAPI provides applications with direct access to the card’s communications port/s for bit sync (HDLC) framing and also transparent bitstream operation for video and voice type applications.
The FarSync T4Ee can also be installed to appear as a NDIS (LAN) interface so it can simply use the TCP/IP stack over PPP to allow access to IP based networks.

The product is supplied with a comprehensive configuration utility, a typical screen is shown. The lines can be reconfigured and restarted without reloading the software. There is context sensitive help and an on-line manual should it be required. An advanced tab permits users to further specify the configuration of the line if necessary. 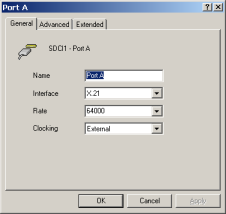 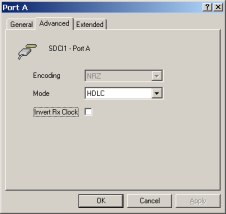 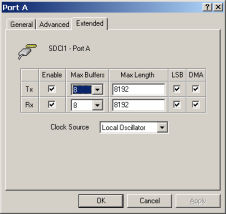 The product is supplied with its own Line Monitor that allows the user to record, display and store line traffic with WAN protocol decoding for fast debugging.

The Char I/O API provides a programming language independent, high-level interface to the FarSync base driver it supports access to bit synchronous (HDLC) framed, transparent bitstream and asynchronous data. The cards can also use the TCP/IP stack to allow access to IP based networks such as the Internet. It also allows selection of the full range of clock modes.

The card installs seamlessly as a plug and play device. The driver supports Linux kernel version 2.6 onwards, including the leading distributions supplied by Redhat,
SuSE, CentOS, Debian, Ubuntu, Fedora, Slackware and more. Multi-processor
systems are supported. The driver is dynamically loadable so a kernel rebuild is not required for the driver to be installed.

FarSite is committed to supporting the cards on new versions of Linux and Linux kernels as they are released. The
source code for the driver is supplied
with the product allowing rebuilding by the end user for use with
almost any of the current or future Linux variants. The driver supports both big-endian and little-endian memory storage formats.

A configuration utility is provided to set the line speed, interface type and protocol, after which the ports may be configured with standard networking tools.

The FarSync SDK includes support for writing applications on both Linux and Windows and contains documentation, working sample applications, development and test utility applications. There is everything a user needs to rapidly develop and test a wide variety of applications such as specialist synchronous (HDLC framed) protocols or transparent bitstream data requirements including Audio, MPEG Video T-DMB and DAB ETI with bitstream encoder and decoder. The FarSync SDK is ordered separately from the FarSync T4Ee.

Our Engineering department provides free email and telephone assistance to application developers using the API as part of the package provided when the FarSync SDK is purchased.

See details on the FarSync SDK Developers Toolkit and the APIs supported.

The card is supplied with software drivers for Windows and Linux. This includes a low level driver that allows access to the communications features available in the hardware and an optionally installable driver that connects with the standard TCP/IP protocol stack to allow access to IP based networks.

The drivers supplied with Windows and Linux allow large numbers of ports to be supported by the installation of multiple FarSync T4Ee cards in a Server. Typically 12 or more cards (48+ ports) can be supported; the card limit is only dependent on the resources available in the host Server and the total bandwidth of PCIe buses available.

The card comprises an AMD processor with no wait state SRAM. The whole memory space may be mapped via the PCIe interface to the PC/Server. The card has a FarSite communications controller (customisable) and the AMD processor contains a quad embedded HDLC / transparent controller with SDMA access (128 buffers per port) and a full range of timers.

The T4Ee supports four synchronous ports which can run to speeds of up to 10 Mbits/s full duplex internally clocked and 10 Mbits/s externally clocked. Total bandwidth supported by the card is 53 Mbits/s. A quad port UART (async controller) is included. Async or Sync operation is dynamically selectable on each port.

Internally generated clocks to drive a serial communications port are derived from either an on-board 8.192MHz clock (32ppm) and can be set to hundreds of different frequencies between 300 baud and 10 Mbits/s, some of pre-programmed list is in the table below. Many other frequencies can be synthesized using the custom frequency tool (supplied), contact us to discuss your requirements.

Some of the internally generated clock rates supported by the T4Ee

Many other frequencies can be synthesized to order, contact us to discuss your requirements. 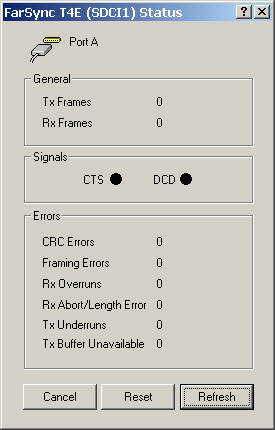 External clocks received from a serial port and used to a drive serial communications port can be any frequency up to 10,000,000Hz.

Clocks sourced from one port can be routed to drive the other ports.

A 16-bit timer enables differentiation between the clock frequencies, enabling auto-configuration of clock synthesisers when cables are connected.

The FarSync T4Ee card is suitable for systems with a PCIe bus, covering single and multi-processor systems. The card is compliant with PCI Express Base specification revision 1.0a and above. The FarSync T4Ee is a bus mastering, 1x (single lane) card.

If you are not sure about your particular system, contact us and we can provide advice on the card that is most suitable for you.

NRZ plus the self clocking (clock for the data is decoded from the incoming data line) line signalling modes NRZI, Manchester Encoding, Conditioned Diphase (also known as Differential Manchester), FM0 and FM1 at speeds of up to 10 MBits/s. This means separate clock lines are not required, these line signalling modes, are a soft configurable alternative to NRZ and a reliable way of handling long high speed cable runs.

This four port card uses a single large high density 100 pin HIPPI type connector, all four lines are available though this connector. The quad port cable HCR4 attaches to the card and splits out the four network interfaces into separate network connectors to provide support for EIA-530 (RS422) and RS232. X.21, V.35 and RS449 are available through transition connectors. Details of the cables and converters available are listed in the cables section of the order information table. Crossover cables, sometimes referred to as null modem cables, or DTE to DCE conversion cables are available, they are also detailed in the table below.