The FarSync Flex X.25 USB adapter has been developed to provide high performance X.25 communications for Linux and Windows systems.

The FarSync Flex X.25 adapter is a high quality X.25 solution for business, government and military applications, it has been developed to provide high performance, versatile X.25 connectivity for Linux and Windows systems.

The FarSync Flex adapter is suitable for connection to all types of X.25 networks, X.25 over the ISDN D channel and leased lines. Typical applications include:

The adapter is compatible with all public X.25 networks, such as Datex-P, BT X.25 Direct, Eirpac, Austpac, Transpac and Itapac to name just a few.

The intelligent FarSync Flex X.25 has been designed for easy installation and to provide high performance in a variety of environments. The Flex adapter uses an ARM processors with Flash for the on board code. 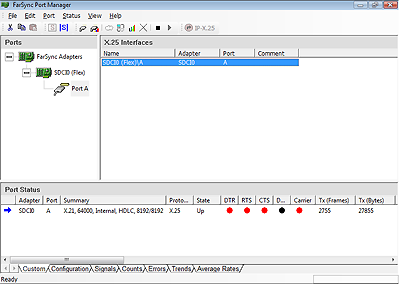 Windows Port Manager showing
configuration of a Flex for X.25 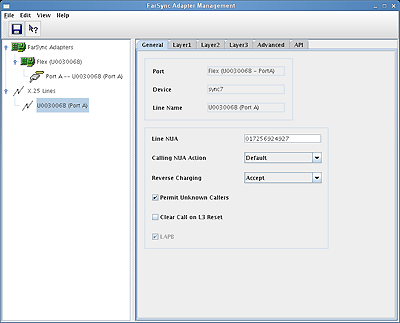 The X.25 line can be reconfigured and restarted without reloading the software and the Flex supports hot plug in.

The IP over X.25 support is included as part of the FarSync Flex X25 product and is integrated into Linux and Windows versions.

The FarSync XOT Extension for Linux is available under product code FS9508, it should be ordered at the same time that the FarSync X25 card is purchased, although a retrofit is possible.

There is also FarSync XOT Runtime software for Linux available that allows XOT to run over the PC’s standard TCP/IP connection such as an Ethernet card.

An optional high capacity pack is available for the FarSync Flex X25. The FarSync X.25 High Capacity Pack allows up to 4,095 simultaneous connections to be made, a huge increase from the standard 254. The expanded capacity applies to SVC, PVC and ISO Transport connections.

A download product id is supplied with the product to allow download of the X.25 software firmware, drivers, utilities and the development toolkit. Cables are ordered separately.

New releases of the software are made available for free download from the Download page in the Support section of this web site.